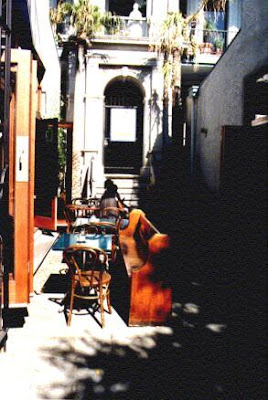 By Jamie Travers-Murison ... by James Travers-Murison - has a degree in history, psychology and Law at Monash University, worked for law and international accounting firms and has traveled extensively around the world spending some of that time searching for a meaning to life in India.

This is an article on religion and age. It is about the generation gap between the old fundamentalist believers of Christianity and the younger generation of self-explorers. They who think they know the flaws of Christianity, yet cannot quite meet the scrutiny of their elders and so satisfactorily communicate these contradictions in the faith to them. The younger generation can see in part what changes are necessary to the current Western belief system. However discussing this, as exemplified by this story, is blocked by a failure to communicate, to break through the convictions of the older generation. Hopefully this article written in 1996, by expressing the so-called young heretic's side, can do a little to resolve this.

At 75, retired reverend and ex‑Korean War medal of honor veteran Major Joe Mullins strode delicately towards us at full pace and shouted something about a rake on the lawn. I made back, picked it up and handed it to him. Our first contact was two hands on a rake. He courteously invited us in.

Inside his suburban villa done up like a tropical mission, practical cheap armchairs lined in a mass around the airy lounge and simple paintings by unknown artists of India, Nepal and the tropics lined the wall. He offered us a drink and at my request for herbal tea, he rushed back to produce a box full of "spicy ginger". With a gleam of angelic joy in his eye he disappeared off to produce his brew. Sweet twirl biscuits with lumps of sweeter cheesy icing were brought out as dad and I examined his art collection.

"I hear you're doing good works in St. Kilda," deep concern emanated from behind his spectacles and well groomed moustache. He completely took me by surprise.

The Wilderness Society came to my rescue.

"The Wilderness Society". I replied.

The Reverend waited for more information.

I nodded. "They're not that bad." I didn't know whether I believed myself or not as I spoke. "They do good things. I know what you mean," I felt like I must maintain a balance, "tainted money, but sometimes it can flow to good things."

"Yes, the media magnates can see a dollar in it." He edged towards the end of his seat. "Throw some cash at the community." Propped on the end he touched his nose. "Makes them look good." He then carefully brushed it.

"I agree, but aren't we all," I didn't quite know where to place myself, his constant observation bearing me down, "tainted beings. It's an imperfect world." The clock seemed to tick long seconds. "You have to operate within those limits." I looked down at the apricot carpet.

"Doesn't that bring us to another topic," he said triumphantly. "There is one being who is not tainted, " the mood became tense, "Jesus was, is the only perfect being who never sinned. And, Jamie, it is only through him and Him alone that we can reach to God's heaven, to save ourselves!" Moe's eyes were beginning to widen. " It is mercy and judgement, mercy and judgement. The two sides of God." His spectacles were precariously sitting on his nose. "One is necessary for the other. Your Indian experiences ... you were interested in Hinduism. The circle..." He drew a circle with his finger pointing at the tip. "Reincarnation, doing things for merit, to get better and better, higher and higher up the scale till you disappear into universal oneness, nirvana, return like a drop into the ocean." His finger spiraled chaotically. I was on the sofa, trying to keep my eyes concentrated on him, but being pulled into every angle of the room. Suddenly the roughly painted rice‑paddies of the Punjab took on enormous significance.

"Isn't that correct" he asserted. "However Christianity says 'you are saved! It is done!' Trying to gain further by acts of merit is asserting yourself over God. Accept Jesus, whose perfection you yourself can never attain and allow him to act through you. Surrender to him and one is with God." He continued oblivious to my condition. "It is the linear approach. A beginning and an end which can be achieved now in this life through a personal experience with Christ." He leaned closer. "It is only our rebellion our attempt to say we can do it alone that separates him from us." He picked up a pad and started to draw.

"This is the crown of God." A very simple crown was sketched.

" This is the world." A circle just below.

"And this is man." Standing on the circle.

" In tune with God, shall we say. And this is what man has done"

Opposite to it he drew instead a little man wearing a crown on the circle.

" Man thinks he can do it alone and for that he suffers." He drew an oblique smile on the little man.

"As far as I can see the Buddhists and Hindus see God as an impersonal figure. Judeo-­Christians however see God as a person to be loved."

He clenched his hand. "Whereas Hindu‑Buddhists see no such relationship to be loved. No one that has suffered for their sins, been crucified on the cross out of his love for them." Moe had moved across the room to my sofa where he sat on the armrest, pad in hand, pen in other. No more than a foot from my face he began again.

"Hence in India they let beggars starve to death, corruption and theft run rife. No necessity to care for others, to save others, because unlike Christianity the focus is on saving oneself. As Jesus died for us to save us from our sins through him, by accepting him as the only way to salvation we must help others, spread God's love to others. It is a living personal faith with Jesus."

He paused. "What do you think?"

I wanted to answer him. Words that normally came quite easily for me were blocked. Stumbling I began.

"Well ... in actual fact... the Hindus ... do create the possibility to personalize God for those who... need to focus on an image of the divine." I paused, feeling like he had gripped my head in a vice. Trying to meet his piercing eyes I continued. "Krishna for instance is one of hundreds of gods they have created... he would be similar to Christ, except unlike Christ he was so pure and . . . perfect... he had no need to suffer. He lived a life of utter bliss. And peace." I neglected to mention Arjuna's crisis of conscience on the battlefield in the Baghavad Gita in which Krishna lectured self-realization through carrying out one's duty no matter how seemingly unpleasant. Arjuna was saying he would prefer to die than kill his evil relatives. Krishna told him that we are all beyond death ultimately and the dance of maya that god has enveloped in us must be fulfilled - evil against good - even if we have to kill to defend that state of righteousness.

"It's their mythology Jesus existed?" He quickly retorted.

I continued barely being able to speak.

"So you see ... Hinduism has both a personal and ... impersonal aspect ... as God himself does." I paused and stared at him and asked him what I had asked Christians before.

"The only way to God is through Jesus." I looked at him and nodded my head. He nodded very slightly his. "How can you exclude all those people that have loved and cared and helped without any thought of themselves? Who just did it because it felt good regardless of any religion, who had perhaps never heard of Christianity. Who just acted out of a deep love for life".

" Feel good ‑ acting to feel better, then one's not acting for god. It's selfishness!"

But what are you doing in your attempts to convert people, to let Jesus enter you, to spread love, isn't it for that good feeling of love I thought. But I felt there was no point in driving the point home when it would most likely greatly hurt him.

Dad interrupted and looked at Moe. "I think you have to go for your lunch".

Ethel, Moe's wife was knocking at the door and in came a bonnie Scottish flower of a well-matured woman. All gushing and smiles she offered her hand to me. "How are you Jamie? We've been praying for you."

"Fine, fine" I was sure I wasn't really supposed to answer. She rushed through in her flowery dress and dad edged me out. On the narrow verandah we shook hands again, slapped shoulders lightly and said our thankyous.

"Good luck Jamie. We'll be praying for you. I think you're almost there".

And now my mind goes back to our meeting and the card, the photograph latched to the top of Moe's clipboard. A photograph of an Islander evangelist singing.

"Your postcard, very good. You said 'perhaps we are all divine beings, except some are more in tune with this than others.' Yes."

Moe looked at me and breathed deeply. "What did you mean?"

I tried to look intelligent ‑ screwed my face up, attempting to disguise my confusion for deep contemplation.

He answered as if I'd given the perfect response. "It's not true. Only Jesus is divine. Only through Jesus entering us can we become divine. The rest I'm afraid are out of it." A gloat of finality entered his voice.

"Then you wrote 'Jesus said 'let not the stick before the stone become lest the house falleth down'. We are all divine creatures seeking our path to God it is just the stick that we must watch for lest it gets us unstuck'. ' " 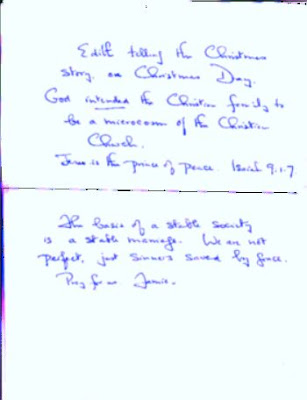 "What did you mean?" Concerned puzzlement furrowed his brow.

I struggled with possibilities of trying to explain the symbolic parable of the stick all opposing the eternal, everlasting stone of God's divine stability and order. Whether to reveal the truth, that I had made it up as an attempt at humour and simply plead temporary insanity.

"I think I was going through a religious stage then. Not very realistic. Head in the clouds stuff I can't really associate with it now. I feel I'm on a much more practical level, getting things done. More down to earth, pragmatic." I spoke with deep seriousness and prayed for divine intervention. 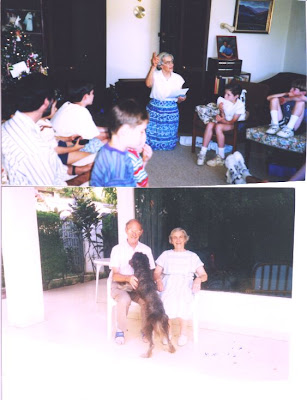 U.O.C.A.
is the Unification Organisation of Collective Ascension (UOCA). It was founded by James Travers-Murison and is dedicated to ascending the human spirit and ultimately creating an utopia on this planet. This will be done holistically using yoga, meditation and diet. For further information email info@wna.org.au or go to http://uocah.blogspot.com or www.wna.org.au